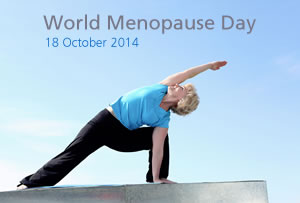 Actions taken at the time of the menopause can avoid chronic diseases in later life, according to a report on women's health marking World Menopause Day (18th October).

Around one third of a woman's life is lived after the menopause. The age of the natural menopause among women in developed countries is between 50 and 52 years, whereas, in less developed countries, menopause often occurs in the late '40s. In the decade after the menopause, women become vulnerable to chronic diseases, such as cardiovascular disease, osteoporosis, cognitive decline (e.g. Alzheimer's disease), and cancer; so the early post-menopause years provide the opportunity for women to take preventative steps to steer a positive course for their future health.

For all women, the report of the International Menopause Society stresses the need to consider;

Lead author Dr Roger Lobo said, "The main message we want to put forward is that, at the menopause, women have a chance to take steps which will help determine whether they go on to live a healthy and active life. There are some conditions, for example osteoporosis and cardiovascular disease, which are clearly directly associated with the menopause, whereas others are more associated with increasing age. Menopause provides women with an opportunity to review their health and lifestyle and to make changes which will benefit their future wellbeing".

"Many of the measures a woman can take are simple, but effective", he continued. "Do a little more exercise, eat a little less, if you consume alcohol, do so in moderation".

The report emphasises that, in consultation with their clinician, women should undergo regular health checks for chronic conditions including cancer and heart disease. The report also considers which pharmaceuticals can benefit women going through the menopause.

Heart disease kills more women than any other condition. Starting the use of estrogen and certain types of MHT (Menopausal Hormone Therapy, also known as Hormone Replacement Therapy) within 10 years of the menopause, or under the age of 60, has been shown to reduce the incidence of heart disease and all-cause mortality (this probably does not apply to starting MHT later in life).

As lead author, Dr Roger Lobo said, "Various studies have confirmed that estrogen and certain types of MHT are beneficial if started soon after the menopause. Interestingly, data is emerging that some medications commonly used to prevent coronary heart disease, such as statins and aspirin, work well in men but not in women – most of the trials have mainly involved men. So MHT may be the best treatment to help fend off coronary artery disease in women.

Of note, cardiovascular disease is the number one killer of women.

A consensus has developed that, in the right population, the benefits of MHT outweigh the risks. For women who have had a hysterectomy – around one third of women in developed countries -the effects of MHT are mostly positive. For the rest of menopausal women – that is women who are within 10 years of the menopause, or under the age of 60 and who have not had a hysterectomy – the risks are generally few in comparison to the future health benefits.

IMS President (and Australasian Menopause Society member) Dr Rod Baber said, "The main message is that women should use the menopause as a reason to have a "health audit", so that they can have an active say in how they are going to live the rest of their lives.

The concerns regarding MHT have become more tempered over the last decade. The consensus is that it helps most women both with menopausal symptoms, and with their future health, but needs to be targeted. In many ways, it is similar to the debate which is currently going on about breast cancer screening, which also benefits women most, but not all women. You need to see your doctor and decide what's right for you. Like all medicine, really".

See Prevention of diseases after menopause