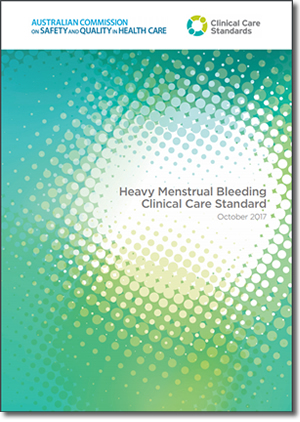 The first nationally agreed standard of care for women experiencing heavy menstrual bleeding says women should be offered less invasive treatments before considering a hysterectomy – a major operation best done only when other treatments are not suitable.

Heavy menstrual bleeding affects an estimated 1 in 4 women of reproductive age. Despite being common, it is also under-recognised, and can significantly reduce a woman’s social, emotional and physical quality of life. It causes considerable disruption to women’s lives lasting several days each month, with some women experiencing associated pain. Sometimes the cause of the bleeding, such as fibroids, can be identified, but for about 50% of women it cannot.

Figures strongly suggest many Australian women are having hysterectomies for heavy menstrual bleeding rather than less invasive treatments. These include a hormone-releasing intra-uterine device (IUD), or a surgical technique called endometrial ablation, which reduces the bleeding by removing the lining of the uterus.

The new Heavy Menstrual Bleeding Clinical Care Standard, from the Australian Commission on Safety and Quality in Health Care, says most women with heavy menstrual bleeding can be effectively cared for by their GP. Referral to a specialist may be warranted in some situations – such as if the woman has uterine fibroids or polyps, or in less common situations where cancer is suspected, if symptoms do not resolve with initial treatments, or if the woman would prefer surgery.

The new clinical care standard offers guidance to clinicians about appropriate care, such as by clarifying on which days during a woman’s cycle an ultrasound scan will be most useful. It also informs patients about the care they can expect to receive.

Commission Senior Medical Advisor Professor Anne Duggan, said Australia had high rates of hysterectomy relative to the UK and New Zealand – and there was also strong variation within Australia, with stark differences between regional and metropolitan areas.

“This clinical care standard was developed after the Commission’s Australian Atlas of Healthcare Variation found the rate of hospital admissions for hysterectomy and endometrial ablation combined in 2012–13 was 5.2 times as high in the local area with the highest rate compared to the area with the lowest rate,” Professor Duggan said.

“Hysterectomy used to be one of the few options for women with heavy menstrual bleeding, but there are now several less invasive treatment options. These differences in admission rates for hysterectomy suggest that the full range of options is not being used across the country – and may indicate women are not being informed about all the options.”

University project officer and mother-of-one Hayley Harrison, 38, from Perth, has experienced heavy menstrual bleeding all her life and says a period lasting eight days is “a good month”, while 10 days is more usual. She estimates she has had 10–20 pelvic ultrasounds and spends $40 on sanitary products for every period.

“I presented to doctors because of the pain associated with heavy menstrual bleeding,” she said. “None of them really asked how heavy my period was. I didn’t know that changing a tampon every hour for at least three to four days was abnormal.

“It wasn’t until I went to see a different doctor – she asked these questions that I’d never been asked by a doctor before. She said ‘You really do have very, very heavy periods – this is really not normal’.”

“It’s such a relief for them to talk to someone about it and know there’s a way forward for them. The clinical care standard will help support doctors to care for these women effectively,” Assoc Professor Bateson said.

Associate Professor Kirsten Black, a Sydney gynaecologist who chaired the Commission’s Topic Working Group that compiled the new standard, said GPs were ideally placed to identify affected women and manage most of the problems, with referral to a specialist only necessary in some cases.

“Sometimes a hysterectomy is required, but the clinical care standard is seeking to ensure that women are offered the spectrum of available treatments and options,” Assoc Professor Black said. 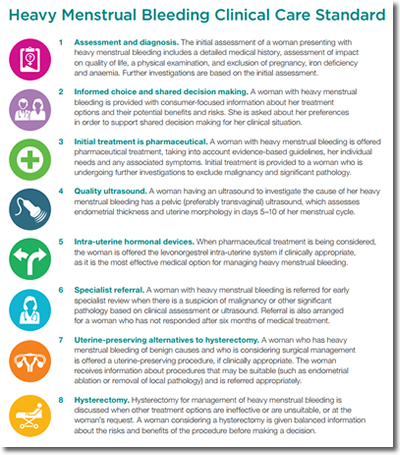