Women, Work and the Menopause Project 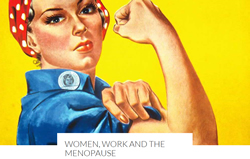 The report presents the key findings and recommendations of a research project entitled Women, Work and the Menopause: Releasing the Potential of Older Professional Women.

“To me, it’s like leading a troop in war. For many women, who have had children, the children are gone, you know. It’s time for a renewed focus on the career.” (Diana, 51, Peri-Menopausal).

“I think it should be a time of recognition of a different age of a woman but I think it’s more a disappearing of women. I’m not sure that I feel that way necessarily but certainly with the job cuts looming I do. I have had thoughts that maybe I would be less able to be employed because of my age. […] I think that generally menopausal women are invisible, certainly as objects of beauty.” (Kirsty, 51, Academic, Peri-Menopausal).

“If you’ve got a manager and head of department who are female, who perhaps have been there or who are sharing their experience with you, then naturally there’s more acceptance and understanding of it. Whereas if you’ve got a male head of department and perhaps male manager, I think you’d suffer more in silence and you wouldn’t share as much.” (Beth, 40–50, Professional, Pre-Menopausal).